In certain regions of Part 2 players will require another route via a formerly explored region, during others retreading exactly the same ground is going to be dramatically different. In Act 1, players fought against with the swampy Fetid Pool against appropriately zombie-like shamblers. Once they return in Act 6, getting wiped out in charge who had been poisoning the area, it’s altered tilesets right into a lush forsest. Inside a prison, players can go through a formerly locked door and climb Shavronne’s Tower, in which a tricky dual bossfight with a few familiar faces awaits.

Winters also excitedly loaded in the town of Oriath, explaining everything that’s happened since players were exiled in the city at the beginning of Act 1. For players who worry about the storyline, this is a large moment: coming back to some place they have heard a lot about, ready for many traditional revenge. 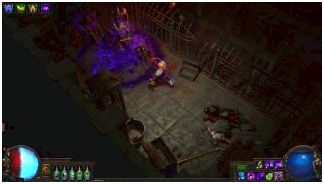 With this particular expansion towards the campaign Road to Exile now appears just like a truly massive game. Regular players will probably express it was already—infinitely replayable because each act’s maps are procedurally generated, having a deep finish-game and regular "challenge leagues" that provide you need to roll a brand new character and play with the campaign with new mechanics and special item drops which will only exists for a restricted time.

Additionally towards the big story update, Nov Oriath brings Road to Exile to version 3.. and entail some big changes to underlying systems and game balance. Rogers known as out one which the road of Exile diehards will probably have strong opinions on: Grinding Gear Games is eliminating double-dipping, a vital aspect in the majority of the game’s enhanced high-finish builds. Removing double dipping have a huge effect on players who presently make the most of it, however in the finish they are saying it’ll allow them to introduce more viable, better balanced builds.

You will see other changes large and small the road of Exile faithful can choose of patch notes when Nov Oriath launches later this season, however in the leadup they’ll have plenty to experience. Grinding Gear intends to launch a "Legacy" league within the coming several weeks, while Nov Oriath is within beta, that will restore every challenge league—and their own products and mechanics—for a final hurrah. Players have a last shot at rare products they missed a couple of years ago when they wait for crack at Act 5’s new bosses.

I’ve not spent enough time in the realm of Road to Exile, but should there be six bosses just within this new expansion even harder and much more complex than Avarius, I’d say it will likely be a great year for doing things-RPG fans.