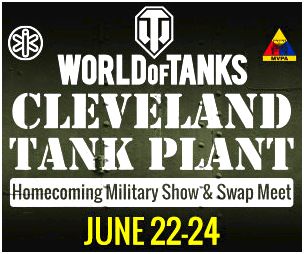 The show will feature vehicles built in the former tank plant such as the M41 Master Bulldog Tank, M42 Duster, M56 Scorpion, M108 and M109 self-propelled howitzers, and M114 and M551 Sheridan armored vehicles. Also featured in show are military aircrafts, the Liberty Air Museum’s B-25J Mitchell, “Georgie’s Woman,” as well as other member-owned aircraft. Known initially because the Cleveland Bomber Plant, and adjoining the Cleveland Hopkins Worldwide Airport terminal, the building’s large doorways continue to be in position and operational, allowing the display of flying military vehicles on the ground using the show’s ground-bound vehicles.

*A $1 service charge per ticket will be included to your advance order if purchased on-line.

Qualified member or spouse (although not both) may purchase as much as 6 tickets, provided the first is utilized by the purchasing member/spouse. Tickets are for sale to active and upon the market U.S. military personnel (including active and upon the market people from the U . s . States Coast Guard, National Guard and Reservists) or their spouses. Must show Current, Upon the market or Dependent Military ID to get discount.  Veterans must show DD214 or perhaps a Veterans administration Medical Card.

Group tickets can be found by contacting Cyndee Youthful at cyoung@ixcenter.com or by calling 216-265-2657 Tickets goes on purchase early in the year of 2017.

off road king: Which of the three days were you at the tank show?﻿